"(Cloud) is complete gibberish. It's insane. When is this idiocy going to stop?"


This is Larry Ellison keynotes in Oracle OpenWorld on September 2008. Only 4 years ago.


"The computer industry is the only industry that is more fashion-driven than women's fashion. Maybe I'm an idiot, but I have no idea what anyone is talking about. What is it? It's complete gibberish. It's insane. When is this idiocy going to stop?"

"We'll make cloud computing announcements. I'm not going to fight this thing. But I don't understand what we would do differently in the light of cloud."

Yesterday Larry stood on that same stage and announced Oracle 12c. The c stands for... Cloud!

And what makes Oracle 12c cloud ready?
12c is a "container database." It's function is to hold lots of other databases, keeping their data separate, but allowing them to share underlying hardware resources like memory or file storage. So this way 12c can be used for software-as-a-service tech companies that need a way to let multiple customers access a single database. It's also geared toward large enterprises who may have hundreds of Oracle databases. It would let them consolidate their databases onto less hardware, saving them money on that and making all of those databases easier to manage.

So in short 2 words: multi-tenancy.

Cloud? IMHO, to me, cloud is multi-tenancy, but also scale (out) and elasticity. Amazon calls their cloud services EC2, the E stands for Elasticity. The new "DB made for the cloud" has no news about scale-out or about elasticity. Maybe we'll need to wait for Oracle 13e... :)

Also there's a new Exadata database machine, called x3... Yet another bigger box to do all the above. They say it's Oracle competition to SAP HANA.

And finally, we have a new player in the cloud services... Oracle! They'll have a public cloud offering (like Amazon, Rackspace, HP) and also a private cloud, which is a replica of Oracle's public cloud that is put in the customer's own data center. Oracle would still own the hardware and be responsible for running it, securing it and updating it. "as a Service" in your premise. It's interesting and even rhymes...

So it seems someone regained his composure... 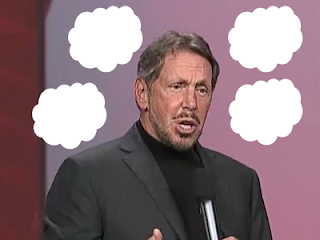