Scale Up, Partitioning, Scale Out

On the 8/16 I conducted a webinar titled: "Scale Up vs. Scale Out" (http://www.slideshare.net/ScaleBase/scalebase-webinar-816-scaleup-vs-scaleout):

The webinar was successful, we had many attendees and great participation in questions and answers throughout the session and in the end. Only after the webinar it only occurred to me that one specific graphic was missing from the webinar deck. It was occurred to me after answering several audience questions about "the difference between partitioning and sharding" or "why partitioning doesn't qualify as scale-out".

Having the webinar today, I would definitely include the following picture, describing the core difference between Scale Up, Partitioning, and Scale Out: 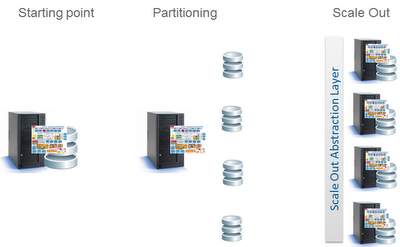 In the above (poor) graphics, I used the black server box as the database server machine, the good old cylinder as the disk or storage device, and the colorful square thingy stands for the database engine. Believe it or not, this is a real complete architecture chart of Oracle 10gR2 SGA, miniatured to a small scale. Yes, all databases including Oracle and also MySQL, are complex beasts, a lot of stuff is going on inside the database engine for every command.

If my DB is like in the "starting point" then I'm either really small, or I'm in a really bad shape by now.
Partitioning makes wonders as data grows towards being "big data". It optimizes the data placement on separate files or disks, it makes every partition optimized and "thin" and less fragmented as you would expect from a gigantic busy monolithic table. Still, although splitting the data across files, we're still "stuck" with busy monolithic database engine that relies on a single box "compute" or "computing power".

This is where Scale-out is different than partitions. It enables distribution and parallelism of the data as well as the so important compute, brings the compute closer to the data, enables several database engine process different sets of data, handling different sets of the overall session concurrency.


You can think of it as one step forward from partitioning, and it comes with great great results. It's not a simple step though, an abstraction layer is required to represent the databases grid as one database to the application, same as what it's used to use.
In further posts I'll go into more on this "Scale Out Abstraction Layer", and also about ScaleBase which is a provider of such layer